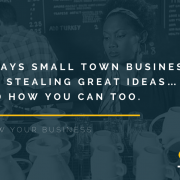 Being from a small town could be the best thing that ever happened to you and your business.

Because, time, risk and the people are all on your side.

What excuses could you possibly have?

When you’re in a small market you get to sit back and watch. You get to watch what the big guys in the big markets are SCRAMBLING to do to reach their people before the next big idea hits and makes them irrelevant.

Why is that good for you?

When you do the same thing, 6 months later, they think you’re a genius.

You don’t have to be the best or even first. You just have to be best in your small town and first where you are. Tweet This Pay attention and draft off of all of the amazing ideas that are out there being tested for your benefit.

That’s right. They’re testing the ideas for you.

THEY, the big guys, are taking the risk.

Like Derek Halpern with Social Triggers, a killer internet marketing blog with a massive audience.

The kind of video that Derek puts out is not cheap to produce. He spends at least $1,000 on each of the high quality videos on his site. It was a gamble that paid off for him, and it can pay off for you too.

You don’t have to spend $1000 on a video, even a cell phone video is better than no video.

How will you know which ideas to use?

Because you know your people.

If you don’t, you should. Because they are right in front of you.

Do you think the big guys get to see their people face-to-face, everyday?

Sure they have lots of expensive data and research to back up their decisions, and that IS an advantage for them. But you have that advantage too, without the cost. Because you get to watch what they do.

And if you really pay attention and understand why they do what they do, you’ll have no excuses and your small town will be your untouchable advantage.

The secret to making their ideas better

One of the greatest advantages of our small town businesses is the fact that we can be something to our people that the big guys can’t, regardless of their budgets and reach. We can create custom, personal experiences that can’t be replicated online or over mass distances.

The trick, the big secret, is to create a product or service that works BETTER when it is local, that actually provides a better experience because it is local, not in spite of it.

When your product is a local gem, and you’re reaching your people through authenticity and the methods that have been tested for you by the big guys, your local tribe won’t be able to help themselves – they’ll have to have the best.

Be the best in YOUR world and because of your world. No excuses.

Have you found a great idea from one of the big guys? I’d love to hear about it in the comments.

Transform your small town small business through the Own Your Hill Insiders workshop.